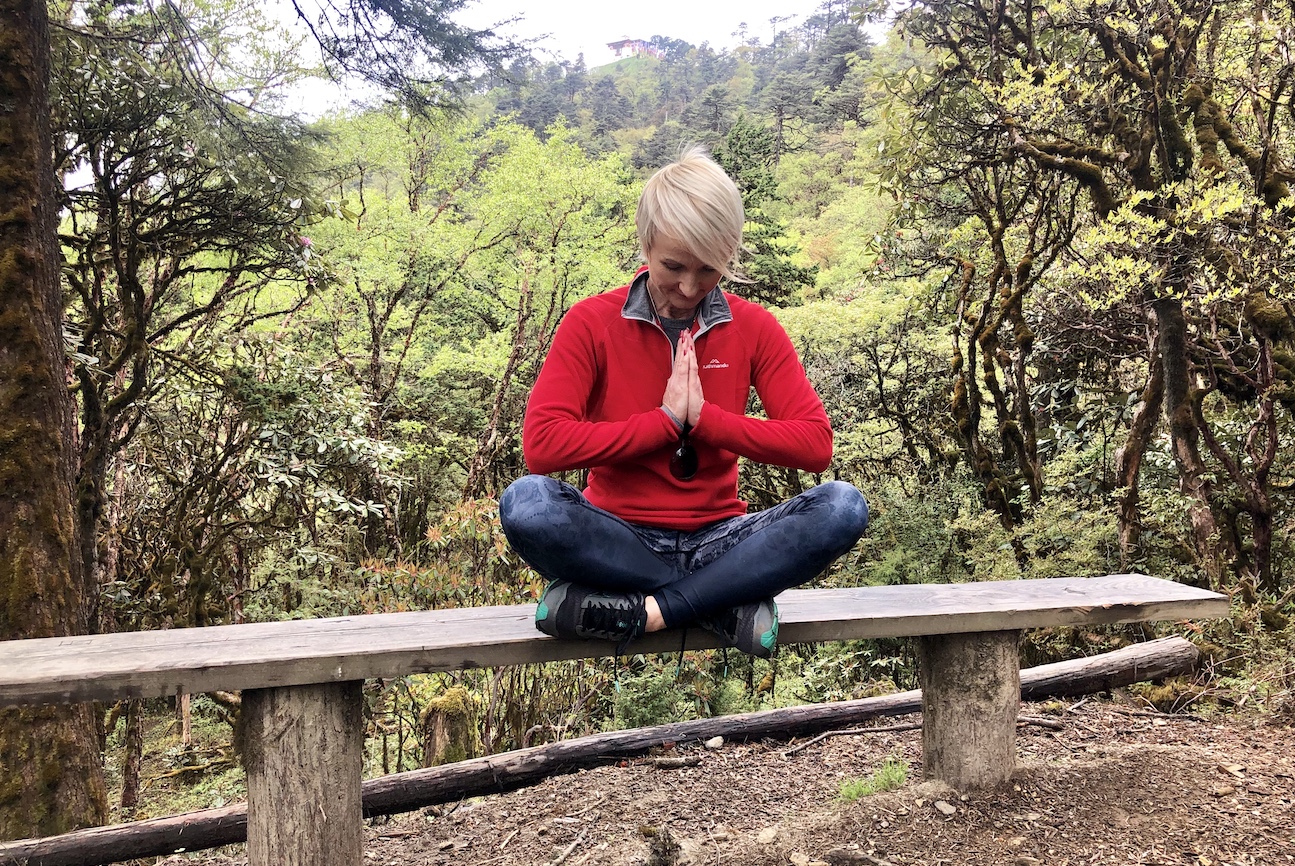 Posted at 15:29h in Blog by Ang Galloway

Bhutan is something of an enigma to the outside world. One of the most geographically isolated countries on the planet, the landlocked Kingdom of Bhutan is nestled deep in the eastern Himalayas, sandwiched between Tibet and India. It is about half the size of Tasmania, with a population of less than a million people. It is home to more monks than soldiers, has no traffic lights and only opened its doors to tourism in 1974. But make no mistake; Bhutan flies under the radar, by design not default. It is mysterious, unspoiled, progressive, and quirky. Full of enchanting contradictions and seductive charm and with a mythical status that belies its sagaciousness.

Gross National Happiness (GNH) has become the ubiquitous tag line for which Bhutan has become synonymous and the cynic in me suspected it might be more propaganda than policy. But it seems that the Bhutanese people really are committed to the business of collective happiness. For thirty years, Bhutan has championed GNH over GDP as  and if the people I met are representative of the population, then I think they might just be on to something. This holistic approach based on the four pillars of spiritual, physical, social and environmental health is measured via a thirty-page questionnaire that asks questions like, “How many people close to you can you count on if you are sick, have financial problems or have emotional problems?” and “How free do you feel to express your ideas and opinions?” While personal happiness might be more intuitive than quantifiable, their environmental ‘happiness’ speaks for itself. Bhutan is the only carbon negative country in the world (ie. they take more greenhouse gases from the atmosphere than they emit) and almost all their electricity comes from hydropower. They even export electricity to India … so yep … they are most certainly punching.

A largely Buddhist country, spirituality is embedded into daily life in Bhutan and karma is at the core of their belief system. I am no angel, but even I was taken aback by what seemed to be a few karmic inconsistencies. Far from the airy-fairy, do no wrong Buddhist philosophy I had imagined, karma it seems is quite quantifiable in Bhutan and basically boils down to a lifelong balance sheet of merits versus sins. As long as your merits outweigh your sins when the final accounts are tallied, then all bodes well for your next life. If, however, you carry forward more sins than merits, then you may well be reincarnated as a three-legged yak. This karmic accountancy seems less to do with morality and ethics and more about balancing the books and it seems that the Bhutanese can offset all manner of sins by walking clockwise around a chorten all day to accumulate additional merits. How convenient.

The lines between spirituality and superstition also seem a little blurry in Bhutan. One must always walk clockwise around a temple or Chorten and spin every prayer wheel (clockwise) to increase the chances of your prayers being answered. Our guide was also more afraid of evil spirits than he was of the bears, tigers, leopards and cobras that resided in the hills through which we were trekking. He was also a staunch believer in the existence of Yeti’s … that communicate via whistling and exude a foul odour. In fact, such was his belief, that he detailed our exit plan should we encounter one whilst trekking.

Our two-week Bhutan itinerary left no stone unturned and was a little more challenging than I had anticipated. We trekked up mountains.. through cypress and rhododendron forests (to an altitude of 3800m), we camped out and dined on more potato and rice than I care to recall. The natural beauty of Bhutan is staggering, and it left me speechless on more than one occasion. On our last day we trekked up and camped above the Tiger’s Nest monastery amongst the clouds. We woke early to hike down and enjoy the serenity of Tiger’s Nest before the trekkers arrived from the town below. There are no words to describe how magical this place is. An experience I will remember until the day I die.

I wasn’t ready to leave Bhutan, but I know I will be back. I whispered it to the prayer wheels (as I spun them clockwise) and scattered my dream across the prayer flags that seem to connect heaven and  earth. I feel like it’s a place we should all visit at least once. In the meantime, I need to find a a karmic accountant to help me balance my books!

Ang Galloway is an Australian-based writer, MEA alum, and midlife explorer. You can read more of her stories on her blog at www.angiam.com.au