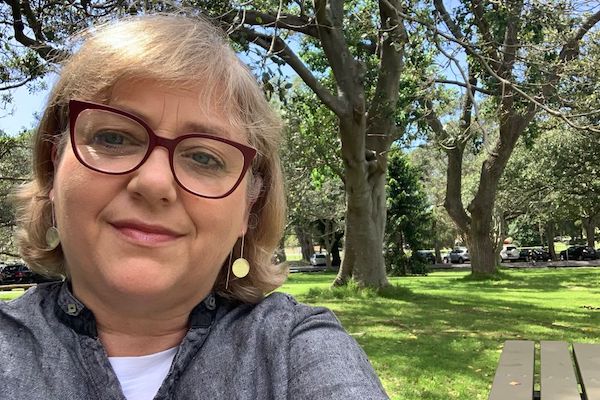 Posted at 13:35h in Blog by Ang Galloway

It’s never too late to fly off to Mexico at a moment’s notice….

Gabriela Domicelj and her husband Derek Young left their busy corporate lives on a whim, to visit the Modern Elder Academy (MEA) in Mexico in February 2019. The workshop they attended was called Consciously curating the second half of your adult life and it has opened a whole new chapter for them.

They’d known Chip Conley for 6 years, through Airbnb, and had been following his pattern of disrupting industries, be it traditional hotels (with his boutique chain) or hospitality in general (with Airbnb). Gabriela was intrigued by his book Wisdom@Work: The Making of a Modern Elder and its link to the sharing economy. While people are living longer, they are dropping out of the formal workforce younger, so there is a dilemma with how to share society’s excess experience and wisdom. She was attracted to the notion of disrupting traditional attitudes towards aging.

At the time, Gabriela was facing three significant transitions: leaving a demanding corporate job, her third and last child was leaving home, and the family was leaving Asia after 17 years. She found that MEA workshop so useful, that she’s been talking to Chip ever since about the idea of expanding MEA beyond Mexico and the US. Gabriela leads the MEAx pilot and also co-ordinates the chapter of MEA alumni in Asia Pacific.

After the MEA workshop, Gabriela and Derek left their corporate jobs and went back to school – to learn how to build an online business. They wrote a book together and set up an online consulting, allowing them to be free to travel.

When they contracted Covid, 18 months ago, they embarked on a new journey: this time a medical one. They’re still experiencing long-haul neurological, respiratory, cardio, gastric and inflammatory symptoms. Their learnings from MEA, as well as the MEA community, have been extremely helpful in allowing them to focus on what’s important and equipping them to design a meaningful future for themselves.