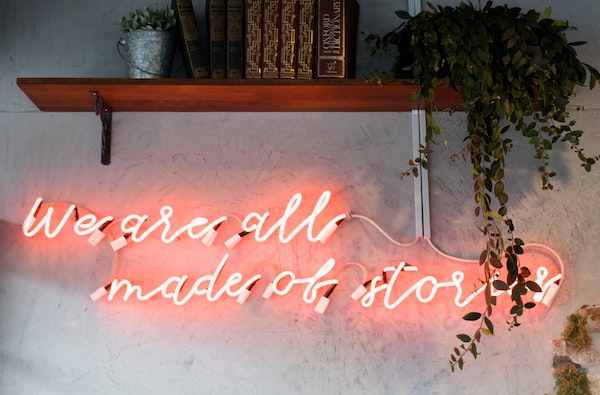 Posted at 16:49h in Blog by Ang Galloway

I read a book a long, long time ago by former NBA star Jerry Lucas. Damn, what was the name of that book? Oh, yes, it was “The Memory Book.”

The key thing I distilled (and can still remember) is the futility of memorizing a whole bunch of disparate facts or numbers without creating a story that combines all the relevant details. Not only have I experienced this in my life, but researchers like Dan McAdams, a Northwestern professor of psychology, have borne it out. In life-story interviews, he compares how people tell their lives with an unfinished screenplay treatment.

Many adults who struggle and are stuck can recount events but usually can’t connect the dots of their story, so their screenplay feels scattered. Generative adults—those who score highly on tests measuring civic-mindedness, energy, and a desire to support future generations—tend to see many of the events in their life in the reverse order, as linked by themes of redemption. What didn’t kill them made them stronger.

“We find that when it comes to the big choices people make—Should I marry this person? Should I take this job? Should I move across the country?—they draw on these stories implicitly, whether they know they are working from them or not,” Dr. McAdams says. In other words, they’re metabolizing their lived wisdom. And it’s particularly helpful when you can share that story with someone else in a confidential reciprocal manner—whether in therapy or a workshop—because they can help you see the common themes through thoughtful observations and questions. Studies have also shown that when we can replay a scene in the third person, talking about ourselves as a wise observer, we’re better able to notice and reflect on what’s to be learned.

When I had a flatline experience almost thirteen years ago, I awoke in my St. Louis hospital room and found Viktor Frankl’s “Man’s Search for Meaning” in my daypack. I spent the next two days devouring that heartbreaking tale of a psychologist in a Nazi concentration camp and tried to distill its story to a simple equation:

From that day forward, I became more intentional in shifting my narrative to find the redemptive meaning in whatever circumstances were happening in my life. This wasn’t purely “magical thinking,” expecting some external power to solve my problems. It was more about being conscious and courageous and seeing my patterns, finding the meaning, and intuiting that lesson moving forward. I became my own puppeteer.

Now, unless you’re a kind-hearted Mister Rogers, you have to be careful as a puppeteer. The purpose of refining your narrative isn’t to stroke your ego or fabricate the past. It’s to apply a little “humility salve” to your wounds such that you feel more resilient and wiser moving forward.

I would recommend you consider picking up McAdam’s book, “The Redemptive Self: Stories Americans Live By.” He shows that highly generative American adults at midlife tend to construe their lives as heroic narratives of redemption—a gifted protagonist journeys forth into a dangerous world and, equipped with moral steadfastness, aims to transform suffering into enhancement. He says this is particularly pronounced in people’s 40s and 50s when these early mid-lifers have more “runway” with respect to their future careers.

How might you think of your life as a “hero’s journey”?